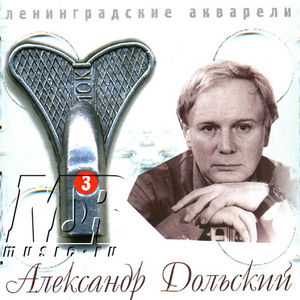 In brief: recorded in 1979 and 1983. Album numbers do not correspond with those written on the booklets, that's why, probably, Dolsky's early songs appeared on the next to last CD of the series. The name of the album is not quite appropriate: sketches of the city life ('a boy standing over Neva river, an angel on the steeple') come along with some reminiscences of author's childhood ('I've even eaten earth when someone spilt the jam on earth'). Water-colors of the philosophical songs (like 'When you feel emptiness and sorrow') alternate something similar to the English-American folk songs ('John's wedding'). Bright guitar technique, word games on the edge of graphomania, naive philosophy and wonderful imitation of the trumpet sound - all this shows you the best of Dolsky.

Quotes: I paid a lot of attention to the music, to the accompaniment, I tried to make it beautiful. Then I realized that the accompaniment should not outdo the lyrics. I try to follow this rule now. (from Dolsky's interview, 1974)

Q. By the way, lots of your songs - Leningrad water-colors among them - are not only connected with arts, but they also are made in the impressionist style. All those undertones...

R. Yes, I've always liked the impressionists. This art has been prohibited in this country when I was young, just like Louis Armstrong's jazz. It's a compliment for me if you think so, but impressionism has much in common with real poetry: the main thing is great power of unspoken. (from the interview, 1988)

The courage is not in saying 'enough', but in undergoing the birth of your soul (song 'When you feel emptiness and sorrow')