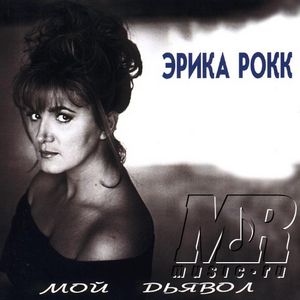 Erika Rokk, a charming girl with a name that reminds of movie stars of the 40es, sings nice simple songs. She should have become extremely popular - especially because the author of lyrics to almost all of her songs is Ilya Reznik, one of the most famous Russian pop-poets. Still no one here knows Erika Rokk's songs. The main problem with her album is that "My devil" is very old-fashioned. It is kind of second-hand in pop-music. It sounds like the worst examples of Soviet variety, making the audience remember songs by Joseph Kobzon, Alla Pugacheva and other Soviet stars, all of them in one. Music in "My devil" is so dull and predictable that it is almost impossible to memorize it. Lyrics are standard: love, passion, you've left me, I'm waiting, you're my heart, you're my soul, "You say love is gone, and all flowers in the garden are also gone". Still all those verses are quite professional, though they are very ordinary. Arrangements are... well, there are no arrangements.

We can only hope that all this is just an impressive postmodern move. Bearing in mind postmodern stylistic games and the success of Dolly the Sheep, Erika Rokk is cloning Soviet pop-music, hoping that clones will be better than originals. If you listen to "My devil" from this point of view, you'll be surprised with freshness of the release.

Anyway, why I'm so mad with this poor girl? She has a good ear for music, she can hold a guitar, according to her photos. She's got a charming smile and a complicated hair-do. What else does the audience need?