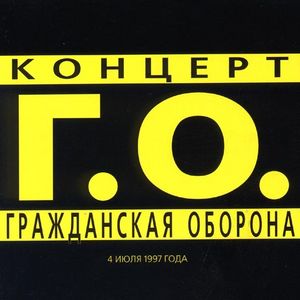 The juxtaposition of complete opposites is what Egor Letov's (GRAZHDANSKAYA OBORONA) acoustics consist of in "Polygon." It's only been a couple of months, and there they are again, performing at the "Soviet Wings" concert hall, in all their aggressive, violent, wild force. All in all, "the battle rages on again┘." It seems that Letov needs a serious defeat before he can strive again towards victory. Kuz'ma is, after all, most of the music of Grazhdanskaya Oborona. And the drums are taken over by Andriushkin, so Letov has, if he wanted to take advantage of it, a lot of space for his vocals.

But then Jackson just seems entirely out of place- his singing ends up ruining everything. It's hard to be Yanka, Nyrych and and Romych at the same time- if you can't do it, don't pretend to.

The concert was held on July 4, on USA's Independence Day, to which the song about the Chinese national hero was dedicated. Now, in 1999, the group is seriously planning a tour in the US. Of course, it's crazy. Then again, it's time to act on your words, and words are something that Letov has a surplus of.