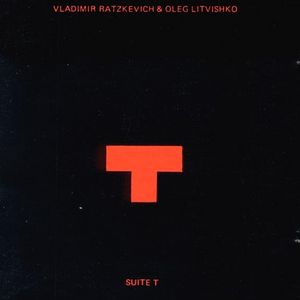 The T-Suitte, compiled and recorded by the former participant of Ruby Attack, Vladimir Ratskevich, and his former partner Oleg Litvishko, is the third disk of the Russian-American music label "Lava," which was also organized by Ratskevich. This is a characteristic electronic product for the beginning of the Nineties. Ratskevich at that time made music for programs and shows such as "Vzglyad" (Point of View). This was where listeners were offered an opportunity to "to see and hear pictures and dramatic scenes of social life." The suite consists of 17 parts, in pretty specific genres (mass, aria, march, dance) and at the same time in pretty ambiguous ones (breathing, clouds, flood, action, etc). The musical language of the suite is based on genre quotations and patterns of applied theater and film music. It mixes the avant-garde, church music, oriental music, noises, rock-n-roll, and just about everything that the authors had access to at that time. The pathos- overemphasizing the attempted seriousness of the authors- sounds a little old and naive now. As it probably did in 1992.