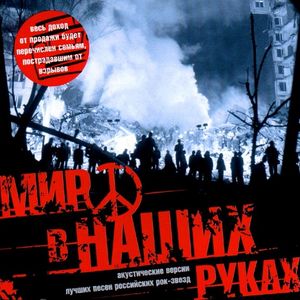 To tell you the truth, I wouldn't ever wanted to see "World in our hands-2". I'd even be glad if the first album has never appeared. Or, better still, I'd be glad if there were no motives to release such kind of albums.

October 15 "Nashe" radio and "Kommersant" newspaper declared the act "Whole world is in our hands", supporting those who've suffered from the terrorist acts in Moscow. Famous musicians performed live on air, an auction was held, where unique musicians' belongings were sold. Music Ru has been reporting about the auction, so you can find all references to it in our archive.

October 19 "Nashe" radio announced that more than 30 thousand dollars was collected. These are the musicians who participated:

They've performed the whole thing with style and inspiration. So releasing this album was an obvious act to do. Especially because the bands are prominent and the songs are well-known.

Still it will be better if the second volume of this album never exists.